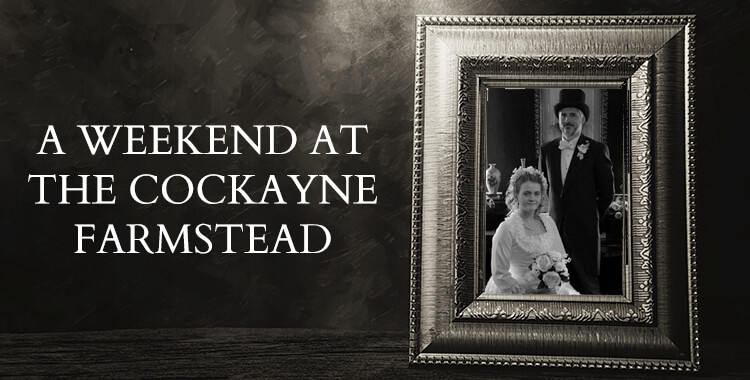 In May of 1870, Henry C. Taylor and Lyda Cockayne were married at the Cockayne Farmstead in Glen Dale, West Virginia.  In June of 2020, I was asked by GKT’s former office manager, Nila Chaddock, to portray Henry Taylor in an historical reenactment of that very wedding to support the Cockayne Farmstead.  Without knowing how to act or a single thing about Henry Taylor or his wedding, I of course immediately said “yes.”  My only condition is that I would get a pair of striped pants to wear with my 1870s-era tuxedo.  Having a knack for knowing when she’s won, Nila agreed, and I was locked in to portray Henry Taylor in “A Cockayne Wedding.”

Little did I know that “A Cockayne Wedding” wasn’t just an actual wedding ceremony.  “A Cockayne Wedding” included a walking tour of the Cockayne Farmhouse.  “Guests” would be greeted in different rooms of the farmhouse by different people involved in the wedding—the bride and groom, the bride’s parents and other family members, the minister, etc.  They would explain who they were and give a little history about wedding and marriage practices of the era.

Thus, my portrayal of Henry Taylor included greeting wedding guests in the south parlor and explaining a little bit about “myself,” my job and business ventures in Wheeling, West Virginia, and wedding practices in the mid to late 1800s.

I was surprised to learn all of this.  I was equally surprised to learn that I would have a fairly lengthy script to memorize in order to clearly and concisely explain all of this to our guests.  Fortunately, after a couple of rehearsals and many hours spent practicing my lines in the car and in the shower, I was finally beginning to commit my script to memory.  If this was going to be my acting debut, I wanted to make sure I nailed it.  People were going to pay their hard-earned money to see this performance, and I was going to make sure everyone got their money’s worth.

Fast forward to May 2021 (after a year-long COVID delay), it was showtime.  Over a Saturday evening and a full Sunday, I, as Henry Taylor, wearing striped pants, married Lyda Cockayne three different times after many, many house tours.  We had a plethora of guests to witness our joyous occasion, and by all account a good time was had by all.   After each wedding, guests were invited to a cup of punch and a slice of cake—based on era-specific recipes—to celebrate the marriage.

Though I won’t be taking my acting talents to Hollywood anytime soon, I had a blast taking part in “A Cockayne Wedding.”  It’s always fun to get out of the office, meet new people, and take part in an event to help raise money for an organization such as the Cockayne Farmstead.  One of my favorite parts about being an attorney at GKT in Marshall County is having the opportunities to do things like this.  It’s about being an active part of the community in which you serve—even if that means donning a full-on Victorian-era tuxedo in the heat of May to reenact a wedding from 1870!

Christian Turak is a partner and oil and gas attorney at Gold, Khourey & Turak.  Christian is a West Virginia resident and is an active participant in the community. Christian has volunteered his time serving as a board member to Helping Heroes, Moundsville Water Board, and is the City Attorney for Cameron, West Virginia.