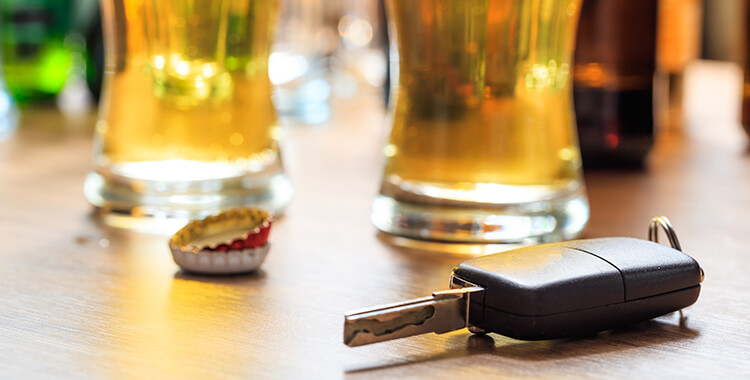 Gold, Khourey & Turak’s drunk driving accident lawyers fight for those injured in alcohol-related car, truck, and other accidents.  Our results speak for themselves.  Our lawyers have helped those suffering from drunk driving injuries collect millions of dollars in compensation.

State driving under the influence (DUI) and driving while intoxicated (DWI) limits are determined by the person’s blood alcohol content (BAC).  The maximum BAC limit for West Virginia, Ohio, and Pennsylvania is 0.08.

However, most states have a zero tolerance limit for those under the legal drinking age of 21.  In most states, including West Virginia, Ohio, and Pennsylvania, if a minor has a BAC of 0.02 or greater, they are guilty of a DUI/DWI even if their driving capabilities are not actually impaired.

Additionally, some states have so-called enhanced penalty DUI/DWI laws.  These laws allow for increased criminal penalties when a person has a higher BAC.  The enhanced penalty BACs for the states in which GKT practices is as follows:

When it comes to drunk driving accidents, the person’s BAC can be extremely important evidence.  It is evidence that alcohol was a factor in causing the car, truck, or other vehicle accident.  This is true even if the person’s BAC does not exceed the legal limit of 0.08.  To put it another way, just because a person’s BAC is below 0.08 does not mean that they were not impaired and that alcohol did not contribute to the accident.

Even more, if the person’s BAC meets or exceeds the enhanced penalty laws, it can be evidence to support a higher compensation award, including punitive damages.  That’s why it’s so important for the police or other law enforcement to administer a BAC test after a crash where alcohol-impairment is suspected.  It’s also why it’s so important for a drunk driving lawyer to obtain that evidence as quickly as possible.

While a BAC test is the only true way to determine whether a driver has been drinking alcohol, there are some common, tell-tale signs of alcohol impairment.  The following are signs that a person may be alcohol impaired:

If you’ve been in a car or truck accident and the driver shows any of these signs, make sure you contact law enforcement immediately.  It’s extremely important that the police document any of these behaviors and administer a BAC test as soon as possible.  If you can, it’s a good idea to document any suspected alcohol-impaired behavior with videos, pictures, or even taking notes with a pen and paper.

The important thing to remember is that your health and safety come first.  If the person is aggressive or threatening, make sure that you don’t put yourself in any danger and call 911 immediately.

Our client was assisting in the tear-down and transportation of a crane when he became trapped in the “pinch point” between the bottom of the counterweight and the crane’s truck frame. The decedent’s widow made claims against her husband’s employer, the selling agent of the modified crane, and the company who originally purchased the crane and modified the counterweight that created the “pinch point hazard.” A settlement was reached during trial.

Our client was hit head-on by a drunk driver. This was an Ohio OVI and dram shop case that went to trial. The Court awarded compensatory damages, punitive damages, attorneys’ fees, and court costs.

My experience with GKT was nothing but great! Great atmosphere, very professional, and great down to earth people. Without them I would have never been able to settle up my accident. Thank you GKT for your excellent service!

I got hit by a truck while crossing route 2 leaving work. The two angels from GKT were there soon after I called. They took care of everything for me. They are wonderful people to deal with from start to finish.

I’ve never experienced an accident where I was injured before I’ve never had to hire a lawyer so hiring a lawyer was very intimidating process for me. I appreciate everything Gold , Khourey and Turak did for me. Very thankful I had them through the entire process. I will be recommending them to all of my friends and family and I will use them again if I ever have to in the future.

Because of the negative physical and cognitive effects of alcohol, drunk driving accidents more frequently result in serious injury and death than other types of accidents.  That is the major reason why the following injuries are more common in drunk driving accident than in a “normal” car or truck accident:

A spine injury can range from a “sore back” to a herniated or slipped disc to a severed spinal cord resulting in paralysis. Similar to brain injuries, a spine injury is more likely to occur when drunk drivers make the poor decision to speed or drive recklessly.  A spine injury is a very serious drunk driving injury.

Again, due to the reckless and risky driving of drunk drivers, broken bones are common drunk driving injuries.  Broken bones, such as legs and arms, can heal on their own within months or result in permanent disfigurement and disability.

Muscle, tendon, and ligament tears and damage are common in all car and truck accidents.  However, they are more frequent in drunk driving accidents because of the speed and violent nature of the crashes.

A person who suffers from a drunk driving injury may be entitled to the following compensation:

Can a Bar be Responsible for a Drunk Driver?

In West Virginia, if a person becomes “physically incapacitated” by drinking alcohol at a bar, restaurant, or other business and causes injuries in a drunk driving or other accident, that bar or restaurant may be liable.  Bailey v. Black, 394 S.E.2d 58 (1990).

In Pennsylvania, a bar or restaurant may be liable for drunk driving injuries if it sold or gave alcohol to a “visibly intoxicated” person.  Pennsylvania’s dram shop laws are found at § 4-497 of the Pennsylvania Liquor Code.

If a person has been injured by a drunk driver, including if the injured party is a passenger in the same vehicle as the drunk driver, it’s important that they contact an experienced drunk driving accident lawyer.  The best drunk driving accident lawyers will investigate whether the drunk driver had been consuming alcohol at a bar, restaurant, or other business prior to the accident and whether the bar or restaurant can be held liable under the state’s dram shop laws.  The attorneys at GKT have this type of experience.

Time is critical.  The sooner a drunk driving accident lawyer is involved, the better opportunity he or she will have to establish a dram shop case and obtain the compensation the client deserves.

Marijuana and Other Drug-Related Accidents

Driver-impaired accidents aren’t always caused by alcohol.  According to the 2018 National Survey on Drug Use and Health, over 12 million people drove under the influence of drugs during that year.  Marijuana is the most common drug at the center of drug-related car accidents.

When drug-related car accidents occur, the injuries sustained can be just as serious and just as deadly as injuries caused by drunk driving crashes.

The following is a list of the most common drugs involved in drug-impaired car accidents:

At GKT, we’re committed to ending drunk driving in our communities.  As part of that commitment, GKT founded the Booze and Cruise, You’ll Lose program in 1992.  Each year a GKT lawyer travels to local high schools to talk to students about the legal, financial, and personal consequences of drinking and driving and driving while impaired.

The Booze and Cruise, You’ll Lose program consists of three parts.  The first part is an interactive quiz where students can win prizes for correctly answering questions about the myths and facts about drinking and driving.  The second part is a mock DUI/DWI traffic stop where a student wears “fatal vision” goggles to simulate alcohol intoxication.  He or she is then put through a series of field sobriety tests by a member of local law enforcement.  During the third part of the program, students hear stories from those who have been directly impacted by drinking and driving.