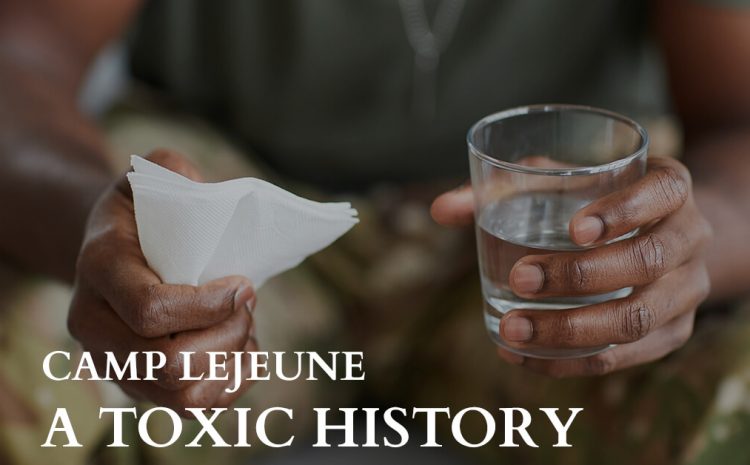 Camp Lejeune had its earliest beginning as a stagging and training point for soldiers in preparation for and entry into World War II.  The facility began operations in 1942 and officially took on the name, Camp Lejeune, beginning in 1944.  Camp Lejeune continued to grow in terms of physical land size and on base population and by the end of WWII, the base was the most modern in the country.  Unfortunately, shortly thereafter, the water supply serving several housing areas at the base became compromised and Marines, family members, workers, and others stationed at Camp Lejeune may have drunk, bathed in, and cooked with water contaminated with high levels of toxins.  The water contamination has been linked to serious health issues, including numerous types of cancer.  It has been called one of the worst toxic water contaminations in U.S. history.

While the water contamination itself is called one of the worst in U.S. history, the cover-up of the contamination could be considered one of the darkest acts of betrayal in United States Marine Corps history.  Despite numerous reports in the 1980s that the water was contaminated and “poisoned,” Marine officials did not disclose these findings and, in fact, denied reports of water contamination.  A study of birth defects among children born at the base and rare illnesses and cancers among former base residents prompted a health study.  In 1999, the U.S. Marine Corps started to notify former Camp Lejeune residents that they may have been exposed to contaminated water.

Shortly after this health study, the federal government began to investigate these claims.  A congressional committee conducted a review of the evidence, circumstances, facts, and allegations and exposed that the Marine Corps knew about the water contamination.  Finally, in 2017, the VA began providing presumptive benefits to those who suffered specific ailments as a result of the toxins in the water.  And in August of 2022, President Biden signed into law the Honoring Our Pact Act of 2022, which includes the Camp Lejeune Justice Act.  This allows veterans, family members, and any other person who lived or worked at the base between August 1, 1953 and December 31, 1987 to file claims to recover for damages from exposure to the contaminated water at Camp Lejeune.

Don’t Wait, We Can Help

Gold, Khourey & Turak has a long history of serving our local veterans and helping them obtain the disability benefits they deserve, and we may be able to help you obtain additional compensation as well.  If you or a loved one served, worked, or resided at Camp Lejeune in North Carolina for at least 30 cumulative days from August 1953 through December 1987, and you suffered serious health issues, you could be entitled to compensation.  Contact our office for a free consultation.  We can be reached 24 hours a day by phone or text at (304) 845-9750 or online by Live Chat or our online form.