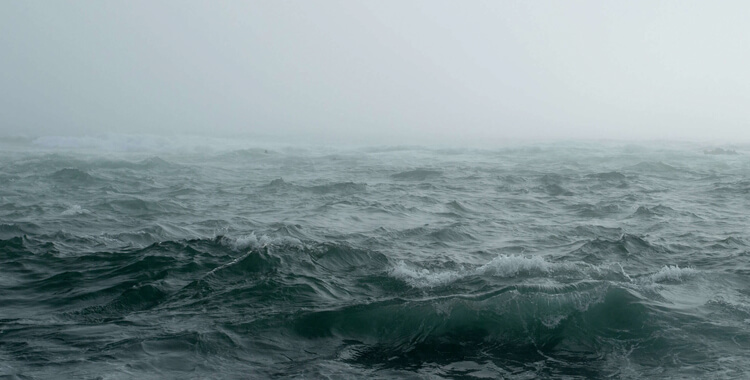 Imagine you’re adrift at sea.  Not only is it nighttime, but it’s unbelievably foggy.  You can barely see your hand in front of your face.  However, you can just make out two islands in the distance.  You know one island offers safe refuge, while the other is barren and treacherous.  Not knowing which is which because of the fog and darkness, you decide to wait for everything to clear the next day.  Unfortunately, even though dawn breaks, it’s foggier than ever, and you can’t make out which island is which.  This describes the nature of oil and gas royalties in Ohio.

You’re still hopelessly adrift, waiting for the fog to clear . . .

For years, Ohio mineral rights owners were adrift at sea, trying to interpret how the royalty language in their oil and gas leases would be applied and under what circumstances oil and gas companies could make deductions for post-production expenses.  That’s because oil and gas royalties in Ohio had never been determined whether the state would follow the marketable product rule or the “at the wellhead” rule.

In essence, if the first rule were followed—as it is in West Virginia—an oil and gas producer could not deduct oil and gas post-production costs unless the lease explicitly stated it could.  On the other hand, if the “at the wellhead” rule were followed—as it is in Pennsylvania—a producer would pay royalties based upon the gas’s value “at the wellhead.”  A producer determines the “at the well” value by deducting post-production costs from the sales price the producer receives.

Ohio mineral rights owners were hoping to obtain clarity on the issue with the Ohio Supreme Court’s much-anticipated decision in the Lutz v. Chesapeake Appalachia, L.L.C. case.  It was widely believed that the Supreme Court would determine once and for all whether Ohio was a marketable product state or an at the wellhead state.

However, that decision never came: the Supreme Court’s decision boiled down to “it depends.” The Supreme Court held that oil and gas leases are like any other contract, and, as a result, the intention of the parties as expressed by the language to the contract is what controls. Because royalty language varies from lease to lease, the Supreme Court believed that it would be inappropriate to fashion a default rule applies to all leases. At this point, Ohio is neither a marketable product state or an at the wellhead state: Ohio is a “read your lease” state.

So, where does that leave those Ohioans struggling to make sense of their oil and gas lease’s royalty language and their royalty statements?  The darkness has been lifted, but it’s foggier than ever for Ohio mineral rights owners adrift at sea.  Whether oil and gas royalty deductions are allowed will be determined by the specific language used in the lease, and how specific royalty language will be interpreted by the courts remain to be seen.  It’s as foggy as ever in Ohio . . .

We can help you determine if your royalty deductions are allowed based on your lease agreement.

GKT is your beacon for navigating through the fog of your oil and gas lease agreement.  If you are receiving royalties in Monroe County, Belmont County, Guernsey County, Jefferson County, or Harrison County or anywhere in Ohio, and would like to have your lease and royalty statements reviewed, call GKT at (304) 845-9750 or live chat with us 24/7 at GKT.com.