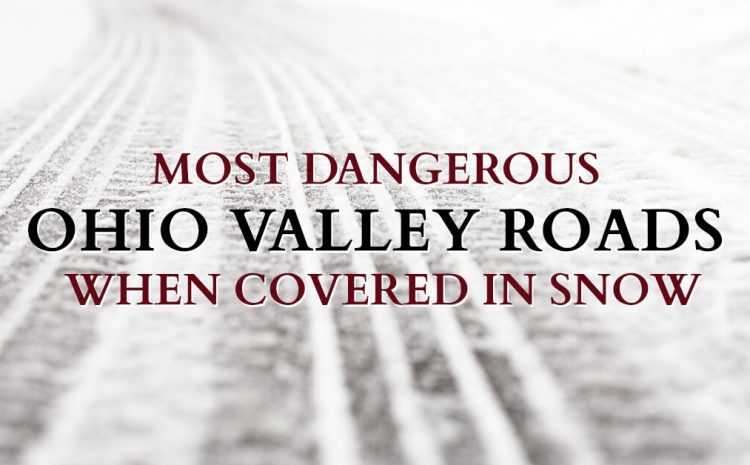 I’ve lived in the Ohio Valley for most of my life, having moved away only for college and law school.  In fact, I’ve lived on both the West Virginia and Ohio sides of the Ohio River and worked as far south as New Martinsville and as far north as Chester on the West Virginia side.  I’ve traveled up and down Route 7 just as far south and as far north as well.  I think I know almost all the West Virginia back roads in the Ohio Valley, although I’m sure there are still many off the beaten path that I don’t know.  I’m now learning many of the Ohio back roads too (in fact, I almost feel like a newbie to the area, not knowing many of the Ohio roads even after all these years!).

Given all that and the nasty winters we sometimes get here in the Ohio Valley, it’s relatively safe to say I’ve driven on many of these roads in snowy, icy, and even rainy weather and tend to know which ones can be rather difficult to navigate in bad weather conditions.

Given this weekend’s “Snowmageddon” in what has been, at least until this weekend, an already mild winter, I thought it might be helpful to share my experiences with others in the Ohio Valley, as not everyone has grown up in Wheeling, St. Clairsville, New Martinsville, Bellaire, or any of the other local towns, and even if they have grown up here, they likely haven’t traveled every county or township road out there.  Because I’ve also not traveled all these roads, I reached out to my Facebook friends to gather their thoughts as well about which roads tend to be hazardous in, well, hazardous weather.

Route 250 in West Virginia and Ohio

When nasty weather does strike, Route 250 in both these areas becomes dangerous very quickly, especially when someone is traveling downhill too fast or does not have adequate power or four-wheel drive capability to make it uphill with any momentum.  Add in the winding horseshoe and S curves along these roads, and a layer of ice or snow will make driving feel like ice-skating on wheels!

Of course, Route 250 is not the only steep, hilly, twisty, curvy road in the Ohio Valley.  Blaine Hill on National Road between Lansing, Ohio and St. Clairsville, Ohio is equally dangerous in snowy and icy weather.  Many a car and truck have ended up in the ditch alongside Blaine Hill as a result of inclement weather, as even the safest of drivers cannot always navigate a sled riding hill in a two-ton vehicle sliding on ice.

Wheeling Park Hill, Waddles Run Road, and Benwood Hill in Wheeling, West Virginia are also steep, twisty, curvy roads that can be nail-biters to drive when covered in snow or ice.  Similarly, Route 86 between Wheeling Avenue in Glen Dale, West Virginia and Route 88 in the Mount Olivet and Sherrard areas of Wheeling is another steep hill that can be very scary to drive in foul weather.  Having lived in Mt. Olivet just past Bethlehem in Wheeling for over 14 years, I can also attest to Bethlehem Hill and Interstate 470—both sides of that hill—being hazardous in snowy, icy, and even rainy weather.  Trying to get down from or up to the top of Bethlehem Hill was always a crap shoot, having to pick between the slower speed limit and less traveled, yet also less likely to be cleared, Bethlehem Hill versus the faster (read: more dangerous) speed limit, heavily traveled, but more likely to be cleared Interstate 470.  Either way, drivers take their chances traveling these roads in terrible winter weather.

Another road I’ve traveled frequently is GC&P Road in Wheeling, which begins at the intersection of Bethany Pike at the bottom of Oglebay Hill and winds its way past Triadelphia and into Valley Grove.  West Liberty college students and faculty often take GC&P rather than Route 88 through Oglebay because GC&P is flatter and as such, seems less dangerous in treacherous conditions.  However, I’ve found the opposite to be true, as GC&P follows a tiny creek, which causes the roadway to ice up far faster and far worse than other roads that do not abut a waterway. Moreover, GC&P is twisty and curvy, and when covered in ice, has caused numerous cars to careen off the roadway and into the ditch or worse yet, the creek itself.  Don’t be fooled by these “flatter,” less hilly roads, as they can be equally if not more dangerous at times!

This is true of interstates as well, because even though flat, they can be deadly in winter weather.  Oftentimes, drivers will travel at highway speed on interstates that appear to be clear of snow and ice, but these same drivers fail to remember the existence, yet invisibility, of the most dangerous kind of ice out there: black ice.  I shudder even thinking about it, as any skilled, cautious driver can easily become a victim of black ice, especially on highway bridges that tend to freeze faster than the highway itself.  This is true along Route 7 past Bellaire, Ohio heading into Shadyside, Ohio where bridges quickly ice up in wet, cold weather.  The same is true along Interstate 70 in Wheeling from Elm Grove through the Wheeling Tunnels in Fulton and over Wheeling Island, where, as we’ve seen from all the bridge repair projects over the past two years, there are numerous highway bridges at risk of harboring black ice.  The Narrows on Route 2 between McMechen and Glen Dale in West Virginia is another interstate-speed area that, because of its proximity next the Ohio River, ices over very quickly and can appear deceptively clear.  The takeaway here is do not assume roads are free of ice just because you can’t see any ice, so slow down and give yourself plenty of time and space to travel on these roads and highways.

As a personal injury attorney at Gold, Khourey & Turak, I’ve seen far too many injuries caused by the negligence of others driving too fast or too recklessly in adverse weather.  While bad weather plays a part in causing crashes, bad weather does not excuse a driver’s negligent conduct in driving too fast for conditions (which includes snowy, icy, and wet roads as well as even fog that obstructs visibility).  In other words, a driver who causes a crash cannot escape liability by blaming the bad weather for his driving and for the crash.

Drivers are required by law and owe a duty of care to drive at a speed that is safe for the road and weather conditions.  This means that, even if you are driving 5 miles below the speed limit on snowy roads, you still may be driving too fast if you cannot stop in time and as an example, rear-end the car in front of you because you slid on snow or ice.  As winter continues for another two months here in the Ohio Valley, please drive cautiously so that you, your family, and the families of those traveling local roads around you can all get home safely.

Teena Miller is a partner and car accident lawyer at Gold, Khourey & Turak.  Her personal injury practice includes automobile and trucking accidents, DUI-related crashes, slip and falls, and wrongful death. Teena is particularly interested in serious accidents involving tractor trailers, and she has received training in the Federal Motor Carrier Safety Act (FMCSA). Teena graduated with her law degree from the University of North Carolina School of Law. In law school, she was named Who’s Who Among American Law Students and received the Holderness Moot Court Gressman-Pollitt Award for Best Oral Argument.