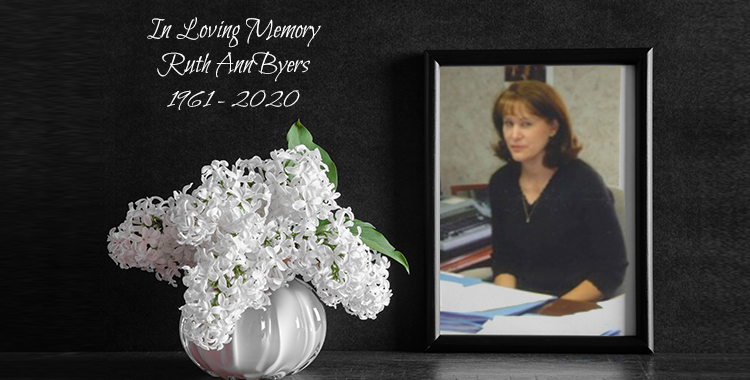 On March 4 the Gold, Khourey & Turak family lost one of its valued members. Ruth Ann Byers, who began work with the firm as a secretary in 1988 and who retired in 2017, died after a difficult battle with Parkinson’s Disease.  Ruth is survived by her devoted husband, Tom, and her beloved son, Austin.

Ruth’s talent and work ethic became obvious to the firm’s lawyers soon after she began work.  She was trained as a paralegal to assist in preparation of Social Security Disability appeals, and in the collection of medical evidence to support those appeals.  Before long, the attorneys who worked with Ruth became confident in her ability and began to expand her responsibilities.  Besides working on their files, Ruth became a trusted and empathetic friend to her many clients.  She handled her cases with both competence and compassion.

When the symptoms of her illness began to make her work more difficult, Ruth had to retire.  Always strong and self-reliant, Ruth depended more and more on the loving care of Tom.  Ruth and Tom’s support for each other was never more evident than during this hard time.

Those of us who knew and worked with Ruth mourn her passing and regret that she suffered with such a cruel disease.  We will remember her great contribution to our clients and our firm, and especially her professionalism, her decency and her strong character.  Our deepest sympathies go to Tom and Austin in this difficult time.  The family has suggested that memorial contributions may be made to the Michael J. Fox Foundation for Parkinson’s Research in Ruth’s name (https://tribute.michaeljfox.org/).