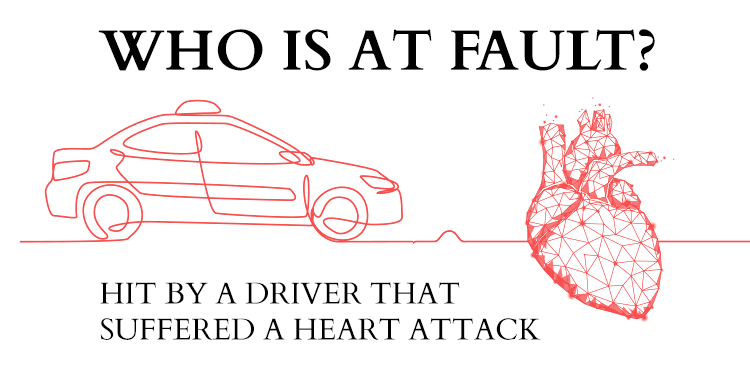 Most of us know that when a driver is negligent in operating a car and wrecks into and injures someone as a result, such negligence can be the basis for a personal injury claim against that driver.

Some examples of these kinds of negligence include:

In each of these examples, the drivers acted negligently, by failing to take the reasonable level of care required of drivers to drive safely and according to the law.

What happens, though, when a driver causes a car accident because he or she suffered some medical emergency, such as a heart attack, stroke, or seizure, while driving?

Well, the law sets up some very stringent standards that must apply before a medical emergency can serve as a valid defense to a personal injury claim.

What Is Considered a Sudden Medical Emergency?

To be blunt, a sudden medical emergency is just that:  a medical condition that occurs so quickly and unexpectedly—in other words, without any advance warning—that it creates a true crisis because it causes the driver to lose consciousness.  Under both West Virginia and Ohio law, very few medical conditions fit within this standard, but some that may fit within this standard, include heart attacks, strokes, aneurysms, and seizures. However, even these conditions are not always an absolute defense to a personal injury claim. A driver who suffers a medical emergency, such as a heart attack, is oftentimes found at fault for the car accident.

In West Virginia, case law on sudden medical emergencies dates to 1955, with very few cases discussing the sudden medical emergency defense in the 66 years since then. In 1955, the West Virginia Supreme Court held that a sudden medical emergency defense can be a bar to a personal injury claim but only if the driver “suddenly becomes mentally or physically incapacitated, such sudden illness being unforeseen and unanticipatable . . .” Sl. Pt. 1, Keller v. Wonn,87 S.E.2d 453 (1955). In other words, the sudden and unexpected onset of a very serious medical condition rendered the driver unconscious or otherwise unable to drive.

In Ohio, the law is similar and dates to 1956, essentially the same timeframe. The standard set forth by the Ohio Supreme Court provides that when a “driver of an automobile is suddenly stricken by a period of unconsciousness which he has no reason to anticipate and which renders it impossible for him to control the car he is driving, he is not chargeable with negligence as to such lack of control.”  Syl. Pt. 2, Lehman v. Haynam, 133 N.E.2d 97 (1956).  This standard is very similar to, if not identical with, the West Virginia standard in that it requires a medical condition that was both sudden and unable to be anticipated. Generally, these questions of whether a medical condition was sudden or unable to be anticipated will depend upon the facts of each claimed medical emergency.  Accordingly, an examination and understanding of each of these two factors is important to know in analyzing the sudden medical emergency defense.

To prove a sudden medical emergency defense, a defendant driver must first provide evidence that, while driving, she suddenly became incapacitated or unconscious, meaning unable to act or respond or physically unable to drive. Most medical conditions will not be sudden or will not cause a person to become physically unable to drive.  For example, a coughing fit will not, in most scenarios, cause a person to become incapacitated and unable to drive.  Heart attacks, strokes, seizures, and aneurysms, however, could be sudden and might cause a person to become incapacitated, but the facts of each situation may vary in the severity of these conditions.  By way of example, one driver may suffer a heart attack and pass out, creating a true medical emergency, while another driver may suffer a heart attack but maintain the ability to drive the vehicle into a safe area.  Thus, not all medical conditions, even if sudden, are treated equally when it comes to the sudden medical emergency defense.

Second, the medical condition must have been unforeseen and unanticipatable, meaning it could not have been predicted to occur.  Using the heart attack example above, even a sudden heart attack that caused a person to pass out may not be a true sudden medical emergency that bars a personal injury claim if that heart attack was predicted or likely to occur.  An example of that is a patient leaving the emergency room after a doctor tells the patient that she is suffering a heart attack or is about to suffer a heart attack very soon, and that patient choosing to drive anyway. In that situation, even if the patient suffers a heart attack that causes her to pass out while driving, that heart attack will not be a valid defense to a personal injury lawsuit, as the patient was on notice that she was or was very likely to suffer a heart attack. Knowing that, the patient should not have been driving and can be held liable for her negligence in choosing to drive under such dangerous conditions. Thus, the specific facts of each alleged medical emergency will need to be examined to determine if the driver had either suffered a similar condition in the past and was likely to suffer that same condition again in the future (for example, epileptic seizures) or if the driver had been warned or was aware that he may suffer from a medical condition that could render him unable to drive.

In addition to knowing the requirements of a sudden medical emergency defense, it is also important to understand that, because it is an affirmative defense, the defendant driver bears the burden of proof.  This means that the defendant driver who claims that she suffered from a sudden medical emergency, such as a heart attack that resulted in a car accident, must affirmatively prove that the medical condition was both sudden (without warning) and unforeseen (not predictable).  Often, this requires an expert doctor who can testify to the medical condition and its sudden, incapacitating effect.  Additionally, this defense may also fare well or poorly based upon the credibility or believability of the defendant driver, who oftentimes may be the only witness to testify that the sudden medical condition did in fact occur and was not made up after the crash as a cover or excuse.

Generally, the defense of sudden medical emergency is rarely used or, if used, rarely prevails.  Our car accident attorneys have the experience, knowledge, and resources to help you win your claim if you’ve been injured by a driver that claims to have suffered a sudden medical emergency.  Few medical conditions meet these stringent standards, as most medical conditions do not come on suddenly while a person is driving, do not cause a loss of unconsciousness, and/or were predictable or had occurred previously, thereby putting the driver on notice that it could occur again.  Our experienced car accident lawyers know what questions to ask, we understand the law, and we can obtain the compensation you deserve.

Injured in a crash that wasn’t your fault?  We offer a free review of your case, and there’s never a fee until we collect compensation for you.  Contact us 24 hours a day at (304) 845-9750, by Live Chat, or complete our online form.

Teena Miller is a partner and car accident lawyer at Gold, Khourey & Turak.  Her personal injury practice includes automobile and trucking accidents, DUI-related crashes, slip and falls, and wrongful death. Teena is particularly interested in serious accidents involving tractor trailers, and she has received training in the Federal Motor Carrier Safety Act (FMCSA). Teena graduated with her law degree from the University of North Carolina School of Law. In law school, she was named Who’s Who Among American Law Students and received the Holderness Moot Court Gressman-Pollitt Award for Best Oral Argument.