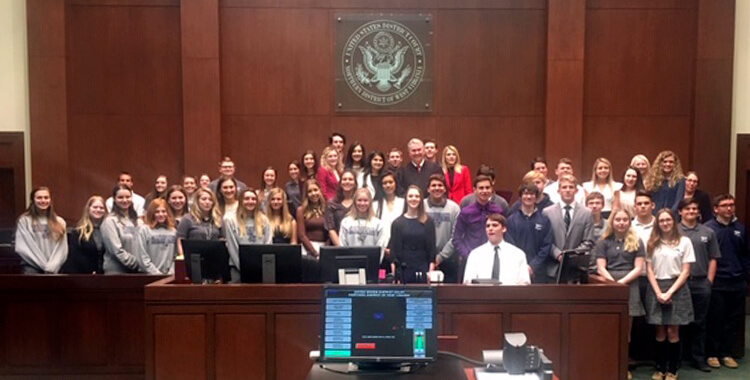 The Moundsville wrongful death law firm of Gold, Khourey & Turak teamed with Weirton Madonna High School and local emergency personnel to highlight the seriousness of drinking and driving in a two-day presentation that involved a mock D.U.I. crash and a wrongful death trial.  GKT helps organize these types of events every year during Prom season.

On Thursday morning, nearly 100 students and teachers from Weirton Madonna High School gathered at the school to hear a scenario that involved drinking and driving on Prom night.  The scenario was created by the students.  Real names and locations were used, and the facts developed by the students were realistic enough that a tragedy like this could actually occur.  Unfortunately, the Prom night scenario created resulted in a drunk driving crash and the wrongful death of a student.

Teachers and students first gathered in the gymnasium to hear the scenario, then went outside to a “real-life” drunk driving crash scene.  One vehicle was upside down with students hanging out the windows wearing fake blood and torn clothes.

Detective Randy Kernen and Patrolman Sam Kryzs of the Weirton Police Department were first on the scene. Shortly after, personnel from the Weirton Fire Department and Hancock County emergency arrived.  With lights on and sirens sounding, the mock scene appeared to be a real emergency.  In fact, the “Jaws of Life” was used to remove several passengers from their vehicles.  Bodies were carried to the ambulance and field sobriety tests were performed.  Witnesses were intrigued and shocked at what they were watching unfold right before their eyes. Members of Health Net even provided a helicopter and flew one of the injured away from the scene.

The driver of the one vehicle, a senior at Weirton Madonna was “arrested” and charged with D.U.I. causing death, among other charges.  Many bystanders commented that the crash was very educational and real, and proved more convincing than a lecture.  Afterward, officers and emergency personnel took the time to meet with students and answer questions about the crash scene. Jody Miller of MADD also talked to the students about the real-life consequences of impaired driving, and the importance of making safe decisions.  Miller’s daughter, Heather, was a victim of a drunk driving crash in 2008.

As in real life, the nightmare for those who decide to drink and drive doesn’t end with a crash.  On Friday, students, teachers, and parents traveled to the Wheeling Federal Building where the drunk driver was placed on trial inside the United States Courtroom.  Judge James P. Mazzone presided over the case, while wrongful death attorney Teena Miller of Gold, Khourey & Turak and W. Howard Klatt of Klatt Law Offices served as the attorneys.  Weirton Madonna students served as co-counsel, jurors, bailiff, court clerk, and witnesses.

Judge Mazzone conducted the trial as close to a real trial as possible. Witnesses were sworn in, reports, photos, and exhibits were entered into evidence, and objections heard, just as would happen in a real trial. Prior to jury deliberations, personal injury attorney Teena Miller encouraged the students to not only remember the facts presented, but also the life of the student lost in the crash.

She was a student, a friend, and a daughter, who had her whole life in front of her.  Then, all of a sudden, her life was taken because the defendant decided to drive under the influence.

Miller continued, “Unfortunately, she is not with us today.  You, the jury, serve as her voice, and it is your responsibility to speak loud and clear, and to find the defendant guilty.”  Miller is a person injury and wrongful death lawyer and represents victims of drunk drivers in her practice.

Defense attorney Howard Klatt encouraged the jury to consider the magnitude of their decision and to review the facts closely.  “Serving on a jury is one of your most sacred rights as a citizen of this country,” Klatt told the jurors.  “Your decision will impact the life of my client for the rest of her life, so I ask that you consider whether the State lived up to their burden beyond a reasonable doubt.  And if you have any doubt, then you must return a verdict of not guilty.”

In the end, the jury returned a verdict of guilty of D.U.I. causing the death. Judge Mazzone addressed the audience and offered some advice.  “What you saw today was a condensed mock version of a trial, but it was very real,” said Judge Mazzone.

Unfortunately, we see these types of trials all too often, and I can tell you that you don’t want to find yourself in this situation.  It is not good for the victim, the victim’s family, or the defendant.  It might not seem like it to you, but you are at an age, 16, 17, 18, and up to age 21, where the decisions you make will start to impact your future.  Be responsible and make safe decisions,

Gold, Khourey & Turak is a wrongful death and personal injury law firm located in Moundsville, west Virginia and represents victims injured or killed by drunk drivers.  As a result of their firsthand experience, their hope is that the mock presentations will prove effective in deterring individuals from drinking and driving.

Additional information about the mock D.U.I. crash and trial can be obtained by calling Gold, Khourey and Turak at (304) 845-9750.