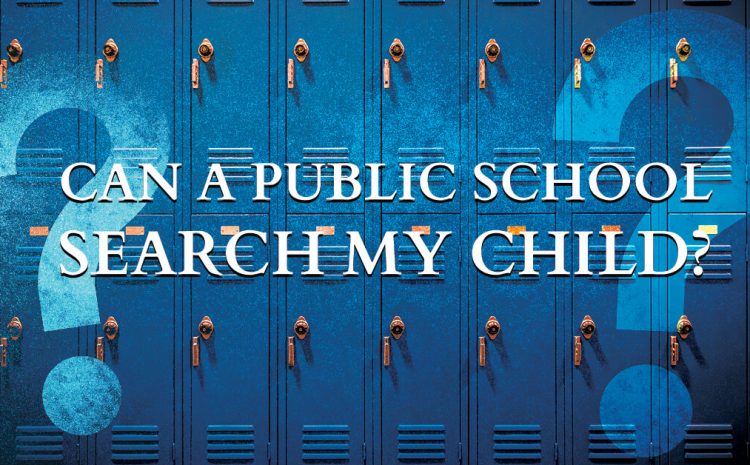 I recently read that the Tyler County Middle School searched their students because, according to them, there is a problem with students vaping and using other electronic nicotine devices while at school.  According to news reports, school personnel searched each student including having the boys lift their shirts to examine the waistline of their clothing and having girls “pull on their bras.”  A Facebook post by Tyler County Schools stated that it conducted the searches in the interests of creating a safe and healthy environment for its students and staff and its concern that the vaping devices can be used to ingest THC and other illegal drugs.

Invariably when something like this happens in our community, I will be asked if the conduct or actions are legal.  This issue is no exception as people have asked me if a public school has the right to search its students.  Unfortunately, the law seldom gives us a simple yes or no answer and this matter is no different.  Most often, the legal system provides guideposts or a framework within which a court evaluates a school’s conduct to determine if it was proper.

In 1985 the United States Supreme Court set forth the framework for assessing the propriety of student searches by public school personnel which West Virginia has adopted.[1]  First, it recognized that public school students are protected under the Fourth Amendment against unreasonable searches and seizures and have an expectation of privacy in their person and articles.  The Court, however, also said that a student’s expectation of privacy is lower than the average person because school officials need to maintain an orderly and safe environment in the school.  To balance these interests, it held that all searches must be reasonable under the circumstances. Reasonableness is determined in terms of 1) initial justification and 2) extent or intrusiveness of the search.

[1] The Supreme Court’s analysis is applicable to public schools only.

Search Must Be Justified and Reasonable In Scope

According to the Court, a search is initially justified when school officials have reasonable grounds to believe that a search will turn up evidence that a student is violating the law or school rules.  The school official must have a reasonable suspicion which can be based upon tips from credible sources, observations of suspicious activity, or history of engaging in illegal conduct.  Rumors, hunches, or association with other students are too speculative and cannot form the initial justification for conducting a search.  In essence, the school official must have a credible reason for suspecting the student broke the rules or engaged in illegal conduct before initiating the search.

Once the search is initially justified, it must be reasonable in scope.  Again, the Supreme Court said that a search is reasonable in scope when it is reasonably related to the purpose of the search and not excessively intrusive given the age and sex of the student and the severity of the infraction.  In other words, the court will consider the severity of the infraction and the risk or danger to both the student and others when deciding whether the scope of the search was reasonable.  For example, a court would grant greater latitude to a school official searching for a weapon, if there was an initial justification for conducting the search, than it would when searching for a missing pair of shoes.  That’s not to say that a school official cannot conduct a search for a missing pair of shoes but that the scope of that search will be more limited than a search for a weapon.

Can A School Official Search My Child’s Locker?

Most often, lockers are considered the least intrusive means of conducting a search.  If the school official has a reasonable and credible suspicion that the locker contains contraband, a court will most likely uphold the search.  The West Virginia Supreme Court of Appeals upheld a locker search when a school official had a credible suspicion that the locker contained alcohol. Moreover, the validity of the search was extended to drug paraphernalia found in the pockets of a jacket hanging in the locker.  Many schools consider lockers school property and courts have upheld policies advising students and parents that they are subject to inspection and search at any time.  Even in the absence of such policies, if a school official has reasonable grounds for conducting a search based on a reasonable suspicion that contraband is in the locker, the search will be considered proper.

Can A School Official Search My Child’s Backpack Or Purse?

Can A School Official Search My Child, Pat Them Down, Or Strip Search Them?

If the school official had credible grounds that the student has a gun in his or her locker, a search of the student’s pockets or a pat down would be reasonably related to the objective of finding the gun and would not be considered excessively intrusive.  In this instance, the purpose of the search is to find a gun that could easily be concealed and the significant danger the gun poses justifies the intrusive nature of the search even though the school official was told the gun was in the locker.

The West Virginia Supreme Court of Appeals addressed the issue of a strip search in a case involving stolen money.  In that case, the school official had a reasonable suspicion that a student had stolen money and had hidden it on their body.  The school official conducted a search and found the money hidden in the student’s underwear.  The Court concluded that the search was excessively intrusive because the danger of missing money did not pose an immediate danger.  The better course of action would have been to call the police and have them obtain a search warrant through proper channels.

Can A School Official Search Everyone In A Group?

Courts typically will uphold searching everyone in a group where the search involves drugs or alcohol.  Again, this is the issue of safety and posing a danger to others.  If a school official learns that a student brought a gun to school but is unable to identify that student, a search of all students may be appropriate.  If, however, the official learns that an unnamed student stole $5.00, it may not be appropriate to search everyone.  Another example would be the instance where a teacher discovers a group of students in the bathroom, smells cigarette smoke, and they are acting oddly when questioned.  If the teacher was unable to determine who was smoking, it may be appropriate to search the purses and pockets of each student present. It would probably not, however, be appropriate to search every student in the school.

I am unaware of all the facts and circumstances involving Tyler County Middle School’s decision to conduct its search and, therefore, cannot comment on their actions.  The students at the school do have a Constitutional right under both Federal and State law to be free from unreasonable searches.  At the same time, the school administrators are responsible for the safety and well-being of all the students.  Consequently, the law has developed a framework within which a school’s actions will be judged.