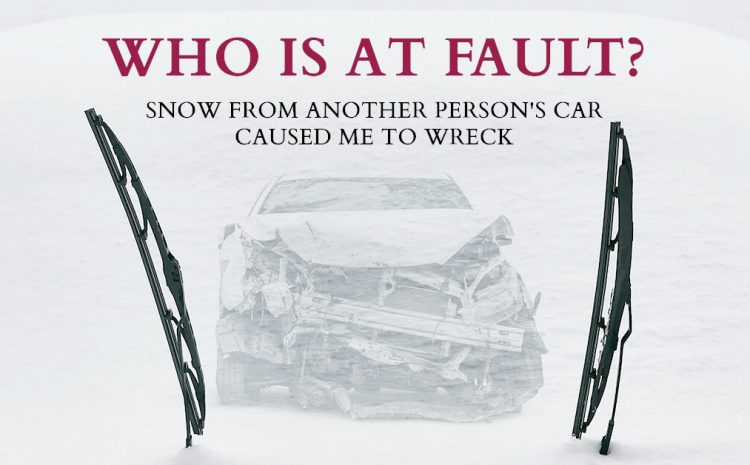 I recently saw a post by the Hancock County (WV) Sheriff’s office asking drivers to be sure to remove all the snow and ice from their cars prior to heading out on to the road.  They posted pictures of a windshield that was shattered when ice flew from another car and crashed into the passenger compartment of a passing car.  Fortunately, there was no passenger in the car and the driver was not seriously injured.  With the bad weather we’ve been experiencing, we need to be mindful of this hazard and its possible legal implications.  You might be wondering, who is at fault if snow and ice from another vehicle causes an accident?

Make Sure You Clean the Snow & Ice From Your Vehicle

It is a fact of life in our area that we will experience snow and ice storms during the winter.  It is also a fact of life that few things are as miserable as having to clean all the snow and ice from your car on a cold February morning as you are leaving for work.  It’s so much easier to clear just enough to see and let the rest melt or fall off the car, especially if you’re running late. However convenient this may be, it is not safe.

First, having snow and ice on the car can impede visibility and make driving more hazardous.  You would be responsible for any accident caused by your inability to clearly see the road or any other cars.  Second, should snow or ice fly from your car and damage another car or injure someone, you would be legally liable for their damages.

This is not much different than any object flying from a car or truck and hitting your car.  Whether it’s a rock from a dump truck, lumber from a pickup truck or ice from a passenger car, drivers have a responsibility to make sure that their loads are properly secured or covered.  This includes a driver’s responsibility to remove snow and ice from a car so that it doesn’t become airborne and hit another car.

What Happens If My Car is Hit & Damaged by Flying Ice?

Your first priority must be maintaining control of your car and bringing it to a safe stop. Because debris or ice often fly from a car without the driver’s knowledge, it’s important, if possible, to try and identify the other driver.

The easiest way is to get the other car’s license number or some other identifiable information.  Do not try and chase or flag down the other driver unless this can be done safely and without causing any risk to you or the other driver.

Not reporting the incident to the police will greatly reduce your chances of success. Also, get the names, addresses, and phone numbers of all witnesses to the accident, including any other drivers who stop to help at the accident scene.  These witnesses will be necessary to substantiate your claims in the event the other driver is unaware of the incident or denies being responsible.

The more information you have, the greater the chances you will be successful in making a recovery for your damages.

What Happens if the other Driver’s Insurance Company Denies My Claim?

You do not have to accept their denial of your claim.  If the facts and evidence strongly support your claim, then you should consult with an attorney qualified to handle your insurance dispute.  It may be that the insurance company does not have all the evidence or hasn’t spoken to all the witnesses.  They may be relying upon their driver who is denying responsibility or are unaware that you have pictures or video of the incident.  I find that many denials can be turned around once I am able to gather all the evidence, talk to the witnesses and provide the complete story to the insurance company.

Of course, there are those instances where it’s your word against the other driver.  These claim denials are the hardest to overcome because the insurance company is typically more inclined to believe its driver.  In these instances, it may be necessary to file a lawsuit against the other driver.  A decision to pursue a lawsuit needs to be carefully evaluated considering all the available evidence and the likelihood of success.

What Happens if I Cannot Identify the Other Driver?

Unfortunately, this happens all the time.  When your car is struck by an object from an unidentified car, your only recourse will be to make an uninsured claim under your own insurance policy.  Uninsured is mandatory coverage that all insured drivers carry on their policy to cover them for losses caused by uninsured drivers.  In this instance the unidentified driver qualifies as an uninsured driver for purposes of making a claim under your policy.  There are, however, some very important things to keep in mind when making this claim.

First, to prevent insurance fraud, your insurance company is going to be wary of any claim that cannot be factually substantiated.  Their concern will be making sure that the damage was caused by another driver and not by you.  The more information that you have, the greater the likelihood that your claim will be resolved without any issues.  A police report made at the time of the accident and the names and address of any witnesses will make things go much more smoothly.

To prevail, you will need to show that you sustained damage or an injury because of an object flying from another car.  In other words, you must show that there was another vehicle involved, that the vehicle, or an object from that vehicle, made physical contact with your car, and that you were unable to identify the driver.  The physical contact requirement is necessary to prevent people making false claims and requires a close and substantial connection between the unidentified driver and you.

For example, while it might be assumed that a tire in the roadway came from another car, the West Virginia Supreme Court of Appeals held that a driver hitting the tire cannot make an uninsured claim unless there is a close and substantial connection between the injured driver and the unidentified driver presumably responsible for the tire in the roadway.

In that case, the Court stressed that there was no close and substantial connection between the injured driver and the unidentified driver since no one knew how the tire came to be in the roadway.  It would have been a different outcome if someone has seen the tire fall from a car before the injured driver hit it. The same logic will apply to a claim based on ice and snow. You will need to prove that any damage you sustained was caused by ice and snow falling from another car as opposed to just assuming that it did.

What Happens If My Car is Damaged Because I Swerve to Avoid Flying Snow and Ice and Hit the Guardrail?

In this instance there is no physical contact between you and the unidentified driver or debris from that driver’s car. We often see this scenario when a driver has an accident when they’re forced off the road by an unidentified driver that leaves the scene and is never found. In this instance you can still make an uninsured claim, but the requirements are more stringent. Because the risk of fraud is so high, you will be required to show through independent witness statements that there was an unidentified driver whose actions forced you to lose control of your car.  A police report or statement from you or a family member will probably be insufficient.  The law requires a statement from an independent, unrelated witness who will verify that another vehicle was responsible for causing the accident.  The witness must be unrelated to avoid potential bias.

If you or a loved one have been injured in a car accident, the car accident attorneys at GKT can help you obtain the compensation you deserve.  Don’t trust the insurance company to help you.  They are profit driven and will either deny your car accident claim or strive to pay as little as possible for your injuries.  The experienced car accident lawyers at GKT know what you are entitled to receive under the law.  Contact our office to schedule your free consultation.  We can be reached 24 hours a day by phone or text at (304) 845-9750, or online through our Live Chat or online form.