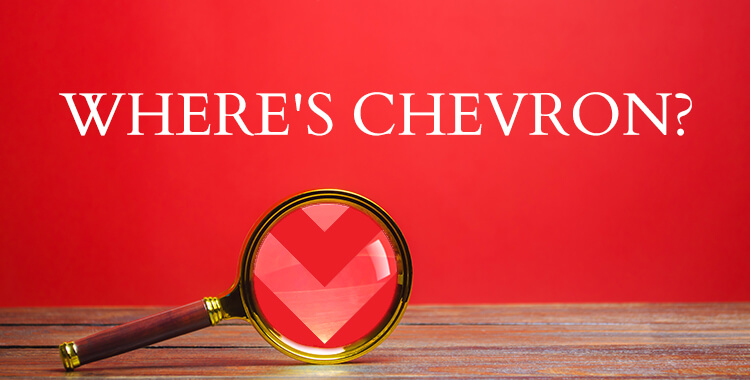 So what’s the deal with…Chevron? Jerry Seinfeld launched his comedic career off of “what’s the deal” jokes, but if you’ve tuned in this week hoping for something similar, you might be disappointed. Unfortunately, I am an oil and gas coordinator that works with an oil and gas attorney and I’m not nearly as funny.  Also, what’s happening with Chevron isn’t too funny either. So where are they going?

If you’re searching for Chevron in Moundsville, Marshall County, West Virginia, good luck.  We’ve added them to the list with Waldo and Carmen SanDiego.  Just like a first date gone terribly wrong, they have “ghosted” us.

They might not answer your phone calls or respond to your emails. If you’ve had a difficult time trying to get in touch with them, don’t worry, you’re not alone.

Why? Have You Heard?

In case you haven’t heard, Chevron announced in December that they were making their Appalachian assets available for purchase.  What that means is they are hoping to sell off what they have in the Marcellus/Utica in the Ohio Valley, including areas in Pennsylvania, West Virginia, and Ohio. I know, it’s sad, but try not to feel too bad for them.  My hunch is Chevron will be just fine.  However, if the rumors are true, and I believe they are, several people who have been working for Chevron in Moundsville, West Virginia, and Marshall County have lost their jobs.  Unfortunately, this most likely includes people you have met or talked to on the phone.  I have personally built relationships with these folks and feel terrible for those who have been let go or have their careers hanging in the balance.  Despite our differences from time to time, there are a lot of very hard-working, knowledgeable people that worked with Chevron and I enjoyed working with them through the years.  Here’s to hoping that all of those who lost their job land on their feet.

What Can You Expect?

So let’s get back to business.  What exactly can you expect if you have had business dealings with Chevron?  I think a lot of those answers are yet to be determined. Chevron has a plan, we just don’t necessarily know what it is yet.  If you have oil and gas questions, contact our firm and speak with our oil and gas attorney, Christian Turak.

Here’s what we do know:

If you have been receiving oil and gas royalty payments from Chevron for wells that have been producing, it’s very likely you’ll continue to receive those payments.  According to what we know at Gold, Khourey & Turak, Chevron intends to keep their wells fully operational so that shouldn’t change in the short term.  Business as usual with respect to what’s already up and running, but that could be about it.  If you need to talk about your situation, please give me a call at (304) 845-9750 and I can schedule you in to talk to our oil and gas attorney.

Did You Receive A Letter?

Click here to see an example of a letter that a client recently received.  We negotiated an oil and gas lease for this client towards the end of 2019.  As you can read in the letter, our client has been informed that. . . “Chevron has elected to not pay the bonus for the oil and gas lease you signed which, absent such payment, becomes null and void on its own terms. . .” If you recently signed an oil and gas lease with Chevron, you may have received a similar letter.

Two points to this:

First, check your oil and gas lease to see what type of language it has regarding payment.

One of the things we try to do when negotiating an oil and gas lease is to modify the payment terms to benefit our client.  Unfortunately, Chevron has generally refused to change their payment language so you may not had the option to modify these terms.  Check your lease to see exactly what the language says with respect to payment.  If it’s standard payment language, Chevron likely has the right to “back out” without consequence and you may receive a similar letter to the one you see here.  We believe it’s likely that any lease that Chevron signed, and have not made payment on, will be voided.

Second, if they have notified you of nonpayment, check to make sure they did not record a copy of the lease or a “Memorandum of Oil and Gas Lease” in your county clerk’s office.

If Chevron has recorded something, and they didn’t pay, you need to demand that they issue a release or surrender of that lease. If there is something recorded, this will complicate things for you when you try to lease those minerals with someone else. Do not wait to do this! Do it immediately so you don’t make life more difficult for yourself moving forward. Demand the release, they owe it to you.

Chevron has signed more than just oil and gas leases throughout the Ohio Valley.  Our office manager and her husband recently signed an Option Agreement with Chevron for the use of their property.  As stated above, we believe that Chevron most likely has stopped all, or a vast majority of their operations.  This means, if you recently signed a surface use agreement, oil and gas pipeline agreement, or any other oil and gas agreement with Chevron, do not expect to be paid.  It might be a good idea to follow up with Chevron to see if they will be making payment.  As I indicated with the leases, if they do inform you that they will not be paying, check the language and also check the courthouse to see if they recorded the document.  If they have recorded a document related to what you’ve signed, you’ll also need to demand they record a release or surrender.

So where does that leave you?  Well, just because Chevron may not follow through with payment, it doesn’t mean that your minerals or surface is unwanted.  Although we are all sitting and waiting like everyone’s favorite Michael Jackson popcorn GIF to see what is going to happen with Chevron and who might purchase their assets, there are other operators who are still conducting business in Marshall County, West Virginia.  Other companies may be interested.  We suspect, however, that most of what is in Chevron’s ‘territory” may not draw much interest in the short term.  You might have to be patient for a while.  The territory is going to eventually be developed, it just might not be Chevron who does it.

If you have minerals that are available to lease, you should speak with an oil and gas attorney before signing any contract.  Contact our office at (304) 845-9750 and set up a free consultation.   We have thousands of acres currently under our representation and we are creating an “inventory” of those acres.  Some of our acres are not drawing much interest, while others have drawn interest but the offers are too low.  From our experience, we know the marketplace will change, and we will be prepared when it does. You should be too.

There’s always strength in numbers, so if you’re interested in leasing your oil and minerals, contact us today at (304) 845-9750. We are happy to discuss the opportunities with you and your family.

So what’s the deal with…Chevron? Only time will tell…