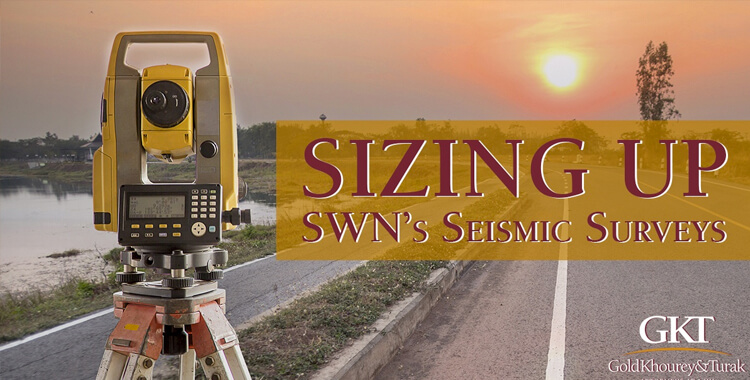 Landowners across the Ohio Valley recently received a letter and a “Permit to Conduct Geophysical Operations” in the mail from SWN Production Company, LLC. The permit allows SWN to conduct a “3D seismic survey or other geophysical operations” as well as conduct “shothole operations” for a payment of $5.00/per acre. That sounds interesting—but it’s not exactly clear what those operations would entail and whether the proposed compensation is fair.  I am an oil and gas lease attorney and I represent  landowners, so I contacted SWN to size up these seismic surveys….

Apparently, SWN is surveying approximately 260 square miles of land from Ohio to Pennsylvania.  In West Virginia, SWN is targeting northern Marshall County, all of Ohio County, and parts of Brooke County—hardly surprising given that this is where SWN’s core acreage lies.  The most interesting part is that SWN seeks to perform these surveys on lands for which it does not have the oil and gas minerals under lease.  Read into that what you will, but in any event, SWN hopes to start their operations in February or March 2018.

What can affected landowners expect?

According to my conversations, most of SWN’s operations will consist of “shothole operations.”  In conducting these operations, SWN will drill holes into the land and detonate charges.  These charges create waves which travel deep into the earth and are reflected back to microphone-like receivers at the surface.  SWN can then create a 3D “picture” of the oil and gas deposits in preparation for drilling. In more densely populated areas (such as Wheeling, West Virginia), seismic operations will be performed by heavy trucks that send waves into the earth.  In addition, SWN intends to perform “hazard surveys” to identify and locate surface structures that may be damaged as a result of drilling activities.

Each situation is different. Your oil and gas lease may already allow SWN to perform these activities. SWN will still seek your signature on their permit to “cover their bases.”  In other cases, it will not and you may have the right to object to SWN’s intrusion upon your land.  Either way, your signature on the permit is valuable to SWN, and, if it has value, you should be compensated accordingly.  If you have questions about your oil and gas rights, contact an oil and gas lease attorney at Gold, Khourey & Turak today.

For most landowners, SWN’s current $5.00/acre offer does not amount to much, especially in light of the nature of SWN’s intended operations and the rights it is seeking. The information SWN would receive by way of these surveys is invaluable to their drilling operations. It’s not about being greedy or being opposed to the oil and gas industry, it’s about receiving fair compensation upon terms that protect the landowner—not SWN.

GKT is currently representing multiple landowners impacted by SWN’s proposed 3D seismic surveys. If you have received SWN’s letter and proposed Permit to Conduct Geophysical Operations, please contact my office to learn more about your rights and how GKT can be your voice.