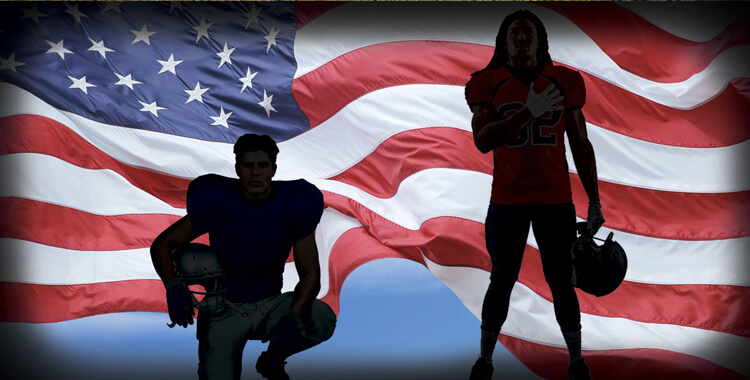 A little more than a decade ago, my husband and I became parents for the first time.  It was a bittersweet time because my husband was deployed to Iraq flying military helicopters at a time when helicopters were routinely shot down with RPGs.  During my labor and delivery, he wasn’t able to hold my hand, but worse yet, he wasn’t able to hold our son after he was born. He didn’t get to meet our son until three months later and even then, for only two weeks before leaving for Iraq again.  He returned home when our son was almost eight months old, meaning he missed all but two weeks of our son’s first eight months of life.  Four years later, my husband deployed again.  By this time, we had four kids all under the age of five.  For the next year, my husband kissed our kids goodnight through a computer screen.  We are a military family, and we know sacrifice.

By now, most of us have heard about the recent controversy surrounding the NFL’s and President Trump’s differing opinions on whether a person must stand during the playing of our National Anthem and whether kneeling is disrespectful to the military.  As a military wife, I was curious to understand the history, traditions, laws, and rules that relate to both our National Anthem and American Flag.  Social media is filled with posts, pictures, comments, likes, and dislikes from each side of the fence, with some saying kneeling during the playing of the National Anthem is disrespectful to our country and our military and others saying it is promoting free speech while remaining respectful at the same time.  Some think the issue is about race, while others believe the issue is about police brutality or even President Trump.  The real questions, I submit, are where did we as a country start, how did we end up here, and where shall we go from here?

By way of history (bear with me here!), on September 14, 1814, American forces raised the American Flag over Fort McHenry in Baltimore following a long and hard fought victory against the British.  Inspired by the sight of our lone flag surviving the battle, Francis Scott Key wrote The Star Spangled Banner.  Forty-seven (47) years later, as the Civil War erupted in 1861, The Star Spangled Banner took on greater significance as it promoted the flying of a single flag “o’er the land of the free and the home of the brave” at a racially divided time in our history.  As the North fought for national unity and the abolition of slavery, The Star Spangled Banner became known as “the Song of the Union.”

By numerous accounts, the tradition of standing during the playing of the song began in 1891 when Senator Julius C. Burrows requested at a West Point graduation ceremony that “every true American, soldier or citizen, when he hears the grand notes of our National air, rise to his feet in patriotic recognition and uncover” (meaning, stand and remove hats).  Similar events in other locales followed, and by 1900, the military was under official orders to stand every time the anthem was played.  In 1918, the song was played at the first game of the World Series, when Americans were outraged at baseball players who chose to play baseball rather than enlist in World War I efforts in Europe.  Played during the Seventh Inning Stretch, The Star Spangled Banner roused the crowd as they rose to their feet, thereafter cementing its inclusion at many subsequent sporting events.

The tradition of standing during the playing of our anthem is also rooted in federal law.  The United States Flag Code was first passed in 1942.  The most current version of the Flag Code is found at 36 U.S. Code § 301 and states that when the flag is displayed during the playing of the National Anthem, the following should occur:

(A) individuals in uniform should give the military salute at the first note of the anthem and maintain that position until the last note;

(B) members of the Armed Forces and veterans who are present but not in uniform may render the military salute in the manner provided for individuals in uniform; and

As a lawyer, I can attest to the difference that one word makes in the interpretation of a clause.  Here, the word “should” is not to be confused with the word “must.”  In other words, federal law suggests what all of us “should” (not “must”) be doing when the flag is displayed while the anthem is played.  Obviously, none of us “must” stand, and none of us will face criminal or civil sanctions if we choose not to stand.  Just as none of us must eat our vegetables, must brush our teeth, must be kind to one another, or must be charitable, so must none of us stand when the anthem is played.  Yet, we “should.”

We should, as a show of solidarity, though we may be divided at times.  Like a family, we may disagree, yet we must function as one.  The following excerpt from an 1891 article in Arthur’s Home Magazine sums it up best:

It is sad to note that often when the national anthem is played people fail even to recognize it.  Last year in nearly all the leading theaters in the country the orchestras played the “Star Spangled Banner” after the performances, and often not one-half the audience knew what was being played.  This is all wrong and shows an ignorance that should not be tolerated.  Even people who do not know one tune from another should be made aware by the action of those who do, that the national anthem is being played.  Some outward tribute of respect should be shown, then all would learn to recognize the air.

Yes, kneeling can be an outward tribute of respect, but so can sitting, squatting, jumping, waving, and a whole host of other actions.  If everyone chooses a different form of outward respect, rather than a single, unified, commonly known outward sign of respect, then I submit we will revert back to a crowd of people failing to recognize when our anthem is even played.  We will forget why it is played, and we will forget for whom it is played.

Our flag and our anthem are deeply rooted in our military history and are a direct tribute to the grueling battles our military endured throughout the evolution of our nation.  Must we remember their sacrifices?  Must we thank them for the great debts they paid our nation?  Must we support them as they endeavor to protect our freedom?  Must we stand to show our respect?  Absolutely not, but we should.  Just as we should eat our vegetables, should brush our teeth, should be kind to one another, and should be charitable, I submit that so should we stand when our anthem is played.

As a military wife, I have seen and experienced first-hand the sacrifices of our military men and women.  My eyes well with tears when our great flag is raised or when our national anthem is played because I know and respect the blood, sweat, and tears that went into that flag and that anthem.  Can we have differences of opinions or feelings?  Absolutely, and we should.  Can we protest, rally, and promote free speech?  Absolutely, and we should.  As with anything, there is a time and a place to do so.  However, to kneel in protest when our flag is displayed and our anthem played is simply not the time nor the place.  Not when our country’s battled history, longstanding traditions, federal law, and storied military sacrifices dictate that, out of respect, we should be standing.  Our flag and our anthem are, at a minimum, a dedication to those who so selflessly gave their all so that the rest of us could have it all.  Our military deserves our admiration and respect.  They deserve our gratitude, and they deserve to know their sacrifices mattered.  Should we stand to show our admiration, respect, and gratitude?  Absolutely.  It’s the least we can do.