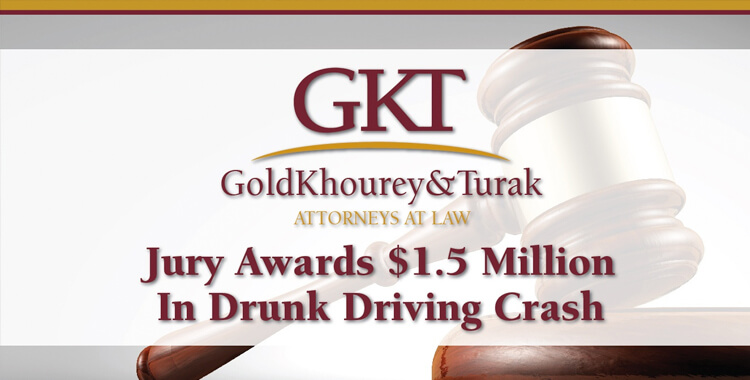 A Monroe County jury awarded more than $1.5 million to a local woman who suffered life-threatening injuries as a result of a December 2014 drunk driving crash.  The personal injury law firm of Gold, Khourey & Turak represented the injured party.

Gold, Khourey & Turak, a personal injury law firm located in Moundsville, West Virginia, filed a lawsuit on behalf of a young woman against the drunk driver and the Beallsville American Legion.  The lawsuit alleged that the drunk driver was a patron of the Legion and that the Legion continued to serve her alcohol after she became visibly intoxicated.

The victim, a 21-year-old woman, was traveling home after dropping off a friend from a day of Christmas shopping when she was hit head-on by the drunk driver resulting in a serious crash.  The black box recovered from the drunk driver’s vehicle indicated the vehicle was traveling 70 miles per hour when it went left of center and hit the victim head-on.  The drunk driver’s BAC level was found to be more than two times the legal limit at the time of the crash.

The young woman was life-flighted to Ruby Memorial Hospital in Morgantown with bleeding on the brain, a ruptured spleen, lacerated liver, broken arm, dislocated elbow, fractured femur, and other serious injuries. Now 25 years old, the woman suffers from long-term physical and non-physical health problems and significant scarring as a result of the crash. She will require medical treatment for the rest of her life.

“The people of Monroe County delivered a strong message to drunk drivers and the businesses who serve visibly intoxicated patrons: it’s not okay, and you will be held accountable. The verdict is a reminder to all of us. Drunk drivers put us all at risk, and everyone, including bars, needs to take responsibility for making our roads and communities safer. Our firm will continue to aggressively pursue justice for victims of these preventable crashes.”

Since 1978, GKT has helped hundreds of individuals seriously injured or killed by drunk or impaired drivers.  We demand accountability, seek justice, and work hard to recover damages against the drunk driver and all negligent parties, including the bar that served the alcohol.  We offer free consultations on all personal injury and wrongful death cases.  If you think you have a case, contact our office today at (304) 845-9750 or live chat with us 2/4 at GKT.com.